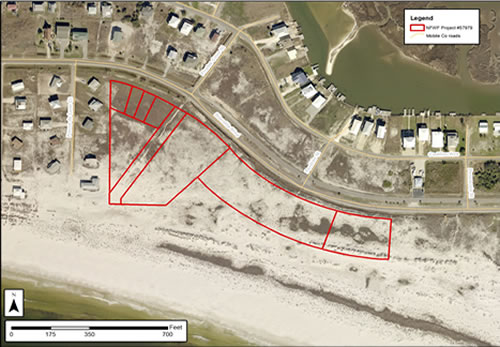 The Atlantic Coast Conservancy, a land trust located in Jasper, Georgia working in conjunction with the Alabama-based Pelican Coast Conservancy, has entered into an agreement with the National Fish and Wildlife Foundation (NFWF) to perpetually protect 9.4 acres on Dauphin Island under a conservation easement. This project will enhance the long-term sustainability of threatened and endangered species which may include sea turtles, neo-tropical migrants, shorebirds and other coastal flora and fauna species. The key barrier island and beach/dune habitat is composed of relatively natural beaches and dunes. The conservation easement which will protect the area from development while allowing passive recreation.

Barrier Island and Beach/Dune Habitat complexes are dynamic systems of constantly changing habitats characterized by sandy soils, sparse, saltwater-adapted grasses and shrubs, and interdunal pools and swales. Winds, tides, salt spray and hurricanes impact these habitats as the sands and the vegetation that they support constantly ebb and flow in response.

Wildlife species of Alabama’s beaches and dunes include beach mice, sea turtles, and nesting and wintering shorebirds that are incapable of surviving (or reproducing, in the case of sea turtles) in other habitats, and their welfare is tied to the welfare of this narrow coastal strip. Because barrier island and beach/dune habitat complexes are both highly valued for development and also provide critically important habitat for a variety of unique plant and animal assemblages, conflicts have arisen between conservationists and developers regarding the future use of the remaining lands, and those private developments that currently impact the nearby public lands. For example, light pollution from nearby development is particularly disruptive to sea turtle nesting behavior, and free ranging pets, such as house cats, impose direct mortality on imperiled forms (e.g., beach mice).

The Dauphin Island project is indicative of all of these conditions. It is typical Barrier Island and Beach/Dune Habitat strategically located between two areas displaying varying intensities of development: single home rental properties and multifamily condominium complexes. Access of the Dauphin Island Public Beach is provided via a footpath through the dune areas. As the popularity of Dauphin Island as a vacation destination continues to grow, so will the ecological stressors on this particular piece of relatively natural habitat. Perpetual protection of this piece of property will have a two-fold beneficial effect. Critical beach /dune habitat will be set aside from potential development, and controlled access of public areas will be established to protect fragile areas from becoming perturbed by anthropogenic activity.

Protection of Barrier Island and Beach/Dune Habitat is identified as a statewide conservation action in the Southern Coastal Plain ecoregion in the 2015 Conserving Alabama’s Wildlife. The NFWF is proving financial support for the project which is ongoing and expected to be completed in 2020.